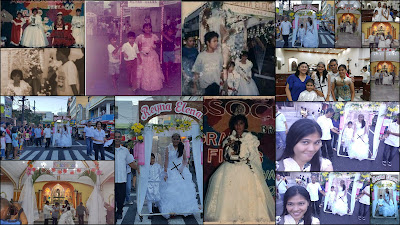 Whoa! Who would have thought that all of us girls in the family would be representing the Queen Helena in the Santacruzan processions years apart!

Often, in the barangays, the most affluent and influential of families in the barangay are the ones being invited, or a yĺoung lady must be exceptionally appealing to them! [Ahem, may I stake a claim on the beauty aspect as we are not among the most affluent, pretty please? Ha ha ha!] And in Alyssa Gem's case, she was a wild card entry in a draw of lots! :-)

All three of us have participated in the barangay level: Ate and I participated in Tinago while Alyssa Gem had a take on Reyna dela Esperanza in Gogon then the Reyna Elena in the 2nd Parish Grand Flores de Mayo and Santacruzan.

Amanda was probably in her sixth grade or first year in high school (around 1989 to 91?) when she represented Reyna Elena with our very own brother, +Christopher as her Constantine. I portrayed the role of Santa Elena with our dear cousin Miko as Constantine the Great in the mid-90's. Almost a decade after my turn (well, we were indeed born ten years apart!), it is an unexpected twist that Alyssa Gem would likewise portray the same character! I am not sure if Vicente Jr. (VJ) did join any Santacruzan, but his first-born child, Kyle Christopher suited well to being Alyssa Gem's Constantine!

More than the pomp and glamour, the Santacruzan, we are taught, ought to be a Catechetical Procession based on the History of Salvation. It includes Biblical Characters and Cultural Religious Figures in the Order of Procession. For the past two years, in our Parish (St. Raphael the Archangel), there has been this initiative to shepherd the faithful back into the historical roots and original religious intentions of the Santacruzan and similar popular devotions. The initiative is among the fruits of last year's Parish Summit on Liturgy and Worship, by which there now exists a duly approved and promulgated Parish Manual of Operations for Liturgy and Worship. This manual contains among others, the Guidelines for Popular Devotions and Practices, with specifications for Aurora, Flores de Mayo and Santacruzan which the Parish and its Pastoral Council uses as its general reference for various liturgical needs.

I reckon that during our time, Cleopatra and Santa Elena were among the notable characters and there was often several Reyna Elena's (I, II, & III). However, this should not be the case if to follow the Guidelines--Cleopatra is not in the list and there is to be no duplication. Each character is either a remarkable lady in the History of Salvation or a cultural religious figure which embodies and signifies the History of Christian Faith in the Philippines.

Now, so much about us! (Thank you for reading and allowing us this moment in the spotlight!)


PS: Will post the proper Order of Procession here when I find time to do so. If you would like to have a copy of the aforementioned manual, please send a formal request to the Parish Pastoral Council Secretariat.

Email ThisBlogThis!Share to TwitterShare to FacebookShare to Pinterest
Filed under: online journal


The Midnight Journal is the first ever Bikolano community resource and social media blogzine, launched in order to keep you in the know of the happenings, events, gigs, meet-ups, workshops, calls for submissions, and artist work opportunities within and around the region, showcase the latest creations of Bikolano artists, and feed your hunger for quality content with a weekly dose of musings, poetry, and artwork features that depict or relate fragments of life in living the Bikolano pride.

It is published through the efforts of the Musings of the Midnight Writer core team.

Posted by Minagayon at 9:52 PM 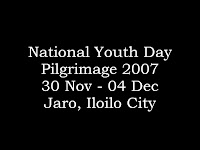 Click the Picasa Box to view the album.
2 comments

Posted by The Midnight Writer at 8:12 AM

Email ThisBlogThis!Share to TwitterShare to FacebookShare to Pinterest
Filed under: Deconstruction Concepts, Fireflies, Musings, Potpourri, The Midnight Agenda
.
It is with both a big sigh and a big smile that we will soon be leaving this blog--the only one among so many that I've had all these years and the only one that really got me going.

It is this blog that kept everything that I just wanted out of my brain, all the dirt and the unnecessary thoughts, and those overflowing from my cup that needed something to catch, lest they fall back into the earth unused. It is also the same blog that showered in the cries of my heart and perhaps it has gone deaf of my whinings.

But my heart could not contain as much this gladness that is raining down on me. Finally, after years and years of wanting and planning, we launch our own website. Perhaps in a way this is symbolic as it could be about how I am moving on with my life.

Close friends and I love to refer to me as a "Goldy Bear", but where have I been all these past years? "Hibernating!" But then I have awakened. And I come to rise with that slow and full stretching, a little nudging, a little wanting to go back to bed and curl up again...

But with the magnificent thoughts of the sun shining outside, of the fresh air, of the flowers and the trees, and all the fruits and nuts and honey that await, I am in the waking up of a lost consciousness, the momentous redemption of a lost pride, and the continuation of a journey that was commenced and halted for sometime, in order to claim the glory of a life that earlier in my youth I have deferred through the prostitution of desires. (Don't bother asking, my musings are carrying my words away from my thoughts today!)

Yes, I have already compromised a lot of "what could have beens", so today, we move on, to a whole new adventure of the Midnight Writer.

Set sail with me. Life goes on. Cheers!
4 comments

Posted by The Midnight Writer at 3:43 PM

Email ThisBlogThis!Share to TwitterShare to FacebookShare to Pinterest
Filed under: Short Fiction
.
The wind caressed his tall, lean, and frail body as cold droplets of rain drizzled. Starkly dressed in his overalls, the man dutifully swept the fallen leaves along the gray alley of the Fourth Street. He gathered the dirt with his near-bald broomstick and thrashed them onto his wheelbarrow. As he did so, a brood of youngsters haggling and cajoling in the prime and zest of their libertarian shower in the rain sprang from one side.


"Dada!" The shrill voice of a  a six-year old echoed in his mind. "I'll be home soon," he spoke as he turned to one of the boys in the street. Thoughtfully, he was filled with visions of home. A little while later, the boys have gibe and he was on his own once again. His feelings were rounding up for his family that his seemingly overdue enterprise waylaid till sunset.

As the prismatic rays evaded the facade and the silhouettes began to shape, he readied himself for home and walked along the alley towards their station to get his week's pay. "I'll buy them pansit." A fair grin was on his brown skin as he turned by the corner. He held close to him a bag of grocery and pansit, then patted his pocket. Just then, a flashy red car passed and the road was smeared rich with the color. The awaited eve came close.


In a tin shack, a young woman grinned and curtsied as she welcomed to their humble home an androgynous figure. The man handed the woman a bag of grocery and pansit. "Dada!" A young boy called out as he emerged from the inside. The man shook his head in a hesitant swing, "No".

They all went inside and the boy was made to sit on top of a covered pail by the dirty kitchen. The young woman and the man stayed by the table and conversed in cautious whispers. A curtain made from katsa was the only thing that divided the tiny shack into parts and the boy could half-hear what they were uttering. At first, the boy was hesitant that he pretended not to hear them but soon, he heard her weeping.


"What is happening?" "Why does she weep?" "Did he hurt her?" Questions filled his mind. And curious enough, he slipped out f the kitchen and he saw her mother pushing the man away. There were tears in her dark deep eyes. The boy, without fully understanding why she was crying, threw his slippers against the man and cried that he should go already.

The man raised his hands in a pass. He drew a thin fold of five-hundred peso bills from the pocket of his crisp polo shirt and handed it to the young woman. She wanted to refuse, but then, she took it anyway. The man bid them a farewell and left, promising to return within a few hours.

i have forgotten about what it is to write...
to catch that in-between the silence and the heart’s beating…
and go about that divide which separates shadow from the ground…
Writing, my first love!
and so, i write. répondez s’il vous plaît.

This work is licensed under a Creative Commons Attribution-NonCommercial-ShareAlike 3.0 Unported License
You are free to quote in part with proper attribution and linkage but for personal use only. Please visit the Book-Liit Section to request posts in hard copies or contact the Midnight Writer for permissions and details.

"Rooted and built up in Jesus Christ, firm in the faith." 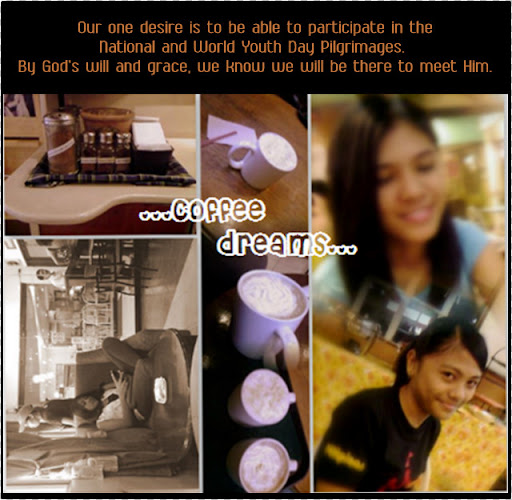 * * *
Want to help us get to a WYD Meeting?
Be our personal pilgrimage sponsor!

Welcome to our fragment of the virtual realm. We are glad to have you here.

As you look around this blog, we hope you find something that is of use to you, something that you can appreciate, and probably share with your friends.

pixies looking through the imagic creases of my poetry and life

your cup of coffee

Among the legends of Kabikulan are the stories on the origin of the world-famous Mayon Volcano. The popular belief is that this majestic landmark has risen out of the grave of its beloved native princess, Daragang Magayon.
I take pride in the rich culture and heritage of my ethnicity, and owe it to the proximity of Legazpi City to the foot of Mount Mayon, that I muse and sign by the name of Daragang Minagayon.

A resource page for all lovers of language, literature, culture, and arts in English and Bikol, our native tongue.

We are building our little directory of online resources about Bicol Culture and Arts as well as a short listing of Bicol Bibliography and Discography.

If you want to be a part of the Minagayon team or if you have a web page or site dedicated to elements of our local culture, literature, music, and arts, including event and fan pages, please contact through any of the instant messaging applications on this blog or email directly to minagayon{at}gmail{dot}com.

Note: This is a non-profit endeavor so we reserve the right to list or refuse the inclusion of pages or links which are purely for personal or business profit. Thank you.

My heart has no pretensions, nor are my eyes raised with pride. I am not looking for great things which are beyond my strength, but I have calmed and quieted my soul. Like a child in her mother's arms, like a child that has been weaned is my spirit, like a child within me.

I Love to Read! 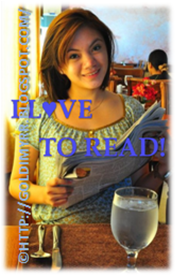 BLOGS serve for delight, for ornament, and for ability.

Their chief use for delight, is in privateness and retiring; for ornament, is in discourse; and for ability, is in the judgment, and disposition of business.